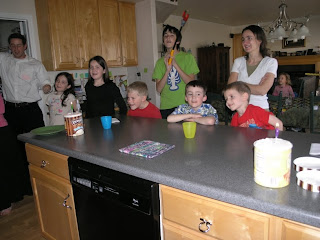 We lit the candles in the ice cream because the pies were to hot. Then we separated the 2 ice creams to make them harder to blow out. 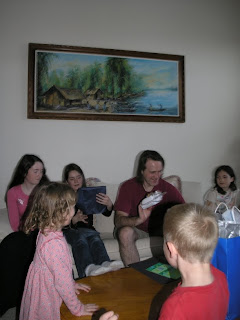 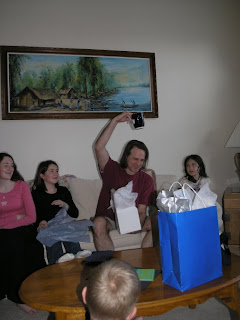 Ryan had a great birthday. We had his brother, Jake, and sister Rose and her family over for dinner, presents, and pie. He had a great time visiting with everyone. He asked for apple pie crumble ala mode instead of cake. The boys got him a new wii controler so the 3 of them could play together. I got him a hot rock massage for a couple nights after his birthday. The great thing about that was when one of the guys at work was complaining about not being able to get in that night for the hot rock massage, Ryan was able to gloat that it was because he had it booked! Ryan's parents came into town latter that week for General Conference and took him out for dinner. He was very birthday-ed. Love you, Ryan!

Posted by Merry Robin at 9:18 PM No comments: 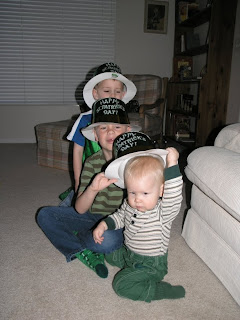 Saint Patrick's Day is one of my favorite holidays because of my Irish ancestry and my love of green, so of course we celebrated. Ryan thinks its just a drinking holiday and can't figure why I celebrate it, but he is Scottish, so I'll forgive him. I long ago stopped making corned beef and cabbage for the occasion because its not really an Irish dish and nobody besides me wants to eat it. So, I've tried other things, and this year it was a real miss. I made this green sauce recipe and put it over pasta and had Irish brown bread on the side. The only good part was the bread. I tore up the green sauce recipe and threw it away it was so bad. Luckily we got the picture before eating dinner so we are all smiling in it! Happy St Pat's! 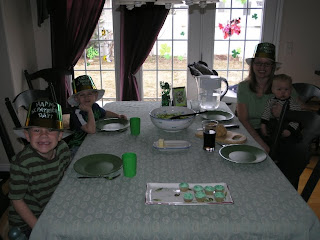 We had some crazy weather... beautiful spring weather, snow, repeat. My crocuses and daffodils opened up, and survived the snow! Yeah! The best part was the snowman we were able to build with the really wet snow we had. We also had a lot of inside playtime. Here are my 2 little supermen, I love them! 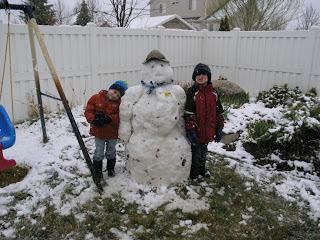 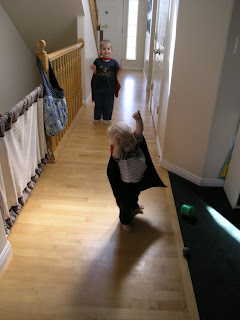 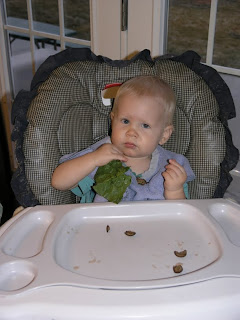 Posted by Merry Robin at 8:52 PM No comments: